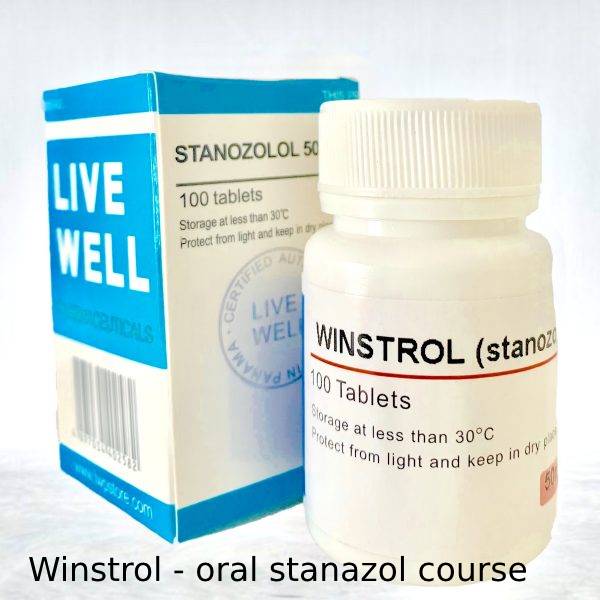 Winstrol is the trade name for the anabolic steroid stanozolol. This drug is quite popular among bodybuilders and athletes – it is ranked third in the respective drug rankings, after deca-durabolin and Dianabol. It is available orally and in the form of injections.
Its history dates back to 1959, when it was first published in medical and scientific journals. In 1961, Sterling obtained a patent for distribution in the USA, where it appeared under the now familiar name Winstrol.
Winstrol is perhaps best known after the 1988 Summer Olympics in Seoul. Canadian athlete Ben Johnson is suspected of having taken the drug at these competitions, or at least tested positive.
Since its introduction, Winstrol has been recommended for the treatment of a variety of ailments – tissue and muscle atrophy diseases, osteoporosis, burns and stunted growth in children. However, in some cases, such as anaemia, Winstrol has not proved very effective.

How the drug works

The mechanism of action of Winstrol is remarkable in several ways. It works primarily by binding to the androgen receptor, although it also has some non-receptor effects. In addition, Winstrol is thought to slightly reduce progesterone activity.

Another impressive and perhaps unique aspect of Winstrol is its ability to significantly reduce the level of globulin-binding sex hormone (GSSH). This helps to increase the amount of free testosterone and other anabolic hormones that can act on muscle tissue.
In addition, Winstrol has an extremely high ability to stimulate protein synthesis – in particular, it has been shown to stimulate collagen production.

Stanozolol is an anabolic steroid derived from dihydrotestosterone (it has a carbonyl group substituted with +3,2-pyrazole at the 3-position and methyl at the 17α-position). Stanozolol is a progesterone antagonist.
It is completely banned in sport, but is used unofficially[3] by athletes as a doping agent, also in bodybuilding, boxing, wrestling, mixed martial arts, athletics, weightlifting and many other sports. It is also used as a doping agent in racehorses.

It is used as a doping agent

One of the most widely used steroidal doping agents. It has been detected in runners such as Ben Johnson, Olga Shishigina and Yulia Chermoshanskaya, bodybuilders Sean Ray and Nimrod King, boxer James Toney, bobsledder Dmitry Trunenkov and many other athletes in various sports.
Despite the risk of virilism, stanozolol is used by women in strength sports as a relatively less dangerous product. The use of stanozolol does not lead to an increase in muscle mass, but rather to the building of muscle definition.

If the anabolic and androgenic effects of testosterone are considered to be equal to 1, the ratio for nandrolone is 10 and for stanozolol 30. Compared to testosterone, stanozolol is twice as active as anabolic and a third less active than androgenic.
A 1986 study showed that low doses of stanozolol (10 mg/day) given to runners for 6 weeks did not increase peak velocity and anaerobic threshold, but significantly lowered blood testosterone levels. Another study reported that a 10 mg injection of stanozolol in healthy men resulted in a 55% drop in blood testosterone levels and several other hormonal changes over two weeks.
Once accurate means of detecting stanozolol were developed, its use in professional sport declined. Together with nandrolone, clenbuterol, methandrostenolone and methyltestosterone, it is one of the five ‘big five’ dopants to be measured in laboratories with the highest sensitivity.

How to take Stanozolol correctly?

As mentioned earlier, Stanozolol is available on the market in tablet and injection form. An interesting fact about Stanozolol is that both forms use the same raw materials, so the injected version can be taken by mouth.
The recommended dosage of stanozolol tablets is 50-100 mg/day for men and 5-10 mg/day for women. The recommended injectable form is 25-50 mg/day for men and 20 mg every 4 days for women. The course usually lasts 6-8 weeks for men and 4-6 weeks for women. However, the highest doses should not be taken for more than 10 days. Some experienced athletes extend the cycle to 10-12 weeks.
The use of stanozolol can vary. This versatile steroid is often used in combination with Oxandrolone, Cardarine and N2 Guard. Most athletes also combine stanozolol with Dianabol, halotestin, testosterone propionate, testosterone enanthate, anadrol and primobolan. In addition, trenbolone and halotestin are ideal supplements for stanozolol during drought. Very rarely stanozolol is used in combination with boldenone, nandrolone decanoate, methenolone enanthate.

Stanozolol injections are most commonly used by bodybuilders. At the same time, they point out that injections are quite painful because the drug is water-based. Bodybuilders inject into specific muscles – gluteal muscles, biceps, triceps, deltoid or calf muscles – as this helps to better shape the muscles. It should also be noted that the active ingredient does not always reach all muscle groups, so injections are not only given in the gluteal muscles, but also in specific muscles. Another advantage of injections is that they put less strain on the liver. However, stanozolol tablets do not pass easily through the liver, which is also a good sign.
Oral stanozolol has a time of activity of 8-9 hours, whereas injected stanozolol has a time of activity of 36-48 hours, i.e. half-lives of 4-5 hours and 18-24 hours respectively. The active substance can be detected in the body for 2 months after discontinuation. It should be remembered that a double dose should not be taken in one day, even if the athlete has missed a dose.

Intended use and duration of use

It is common practice to use Winstrol for weight loss and competition preparation where the goal of the course is low fat, pronounced muscle definition. It is believed that it can also be used to increase mass and strength, but other anabolic steroids are more suitable and less expensive for these purposes.
A course of Winstrol is usually accompanied by a base drug with a similar purpose, such as testosterone propionate. Extended treatment may consist of three drugs – usually Winstrol is combined with testosterone propionate and trenbolone acetate at the same time.

Because of the different hepatotoxicity, the duration of oral and injectable administration is different: six to eight weeks for the former and eight to ten weeks for the latter.